The Biological Sciences Aquatic Chemistry Laboratory is available to faculty and graduate students for research and has the following instruments:

The Beckman LS 6500 Scintillation System is a benchtop liquid scintillation counter designed to provide highly accurate, automated counting of the single and dual-labeled samples. The half-life and window settings for six isotopes (3H, 14C 125I, 35S, 32P, and 22RN are permanently stored in the system. 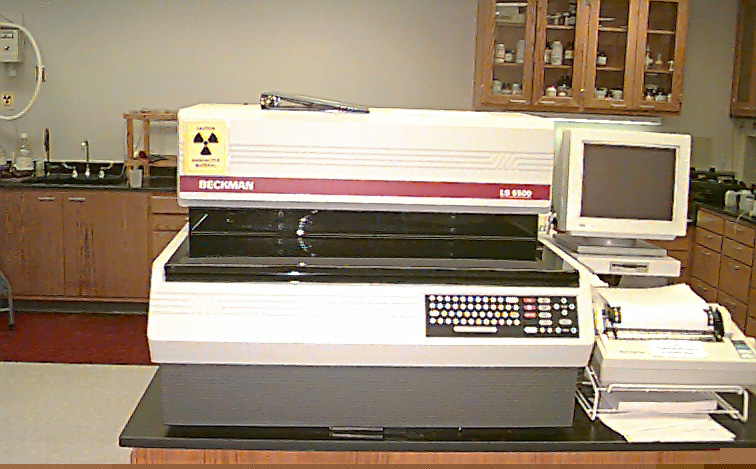 The Lachat QuikChem system automates wet chemical determinations using the principle of flow injection analysis (FIA). The analytes available are nitrate, nitrite, ammonia, ortho-phosphate, silica, and chloride. For N and P lowest levels of detection are 1-4 micrograms per liter. Throughput is approximately one hundred samples per day. The instrument also has an Ion Chromatograph capability. In this process, ions are separated on a column and detected using a conductivity detector. The following anions/cations can be processed: F-, Cl-, NO2-, Br-, NO3-, HPO4-, SO42-, Na+, K+, Mg2+, and Ca2+. The data can be exported to a disk in Excel or as an ASCII file, as well as printed in a normal format. 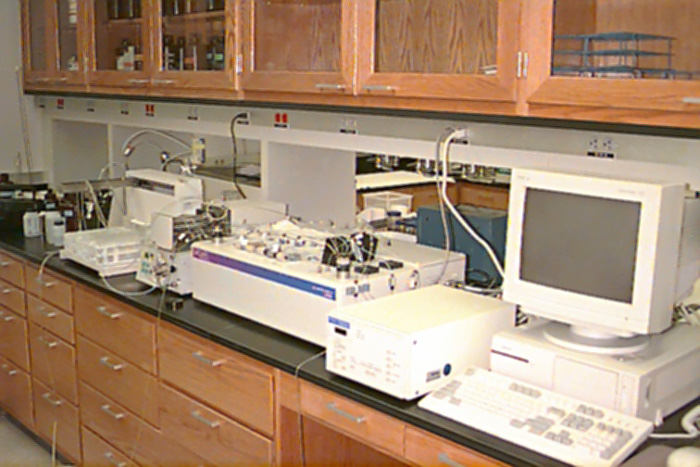 The DU series is a microprocessor controlled spectrophotometer intended for use in quantitative and qualitative biological research procedures that require spectrophotometric measurements in the UV-visible region (190 to 1100 nm) of the electromagnetic spectrum. The instrument has three routine measurement modes: fixed wavelength, wavelength scan and kinetics/time. The fixed wavelength modes are used more routinely than the other two. In this mode, data can be collected in either absorbance or transmittance at up to twelve different wavelengths. The absorbance readings at each wavelength can be converted to concentration using a user input factor. Analyses can be automated with the use of sampling devices such as the sipper or batch sampler. The single cuvette (one cm light path) holder can be replaced by a long (10 cm) light path cuvette holder. 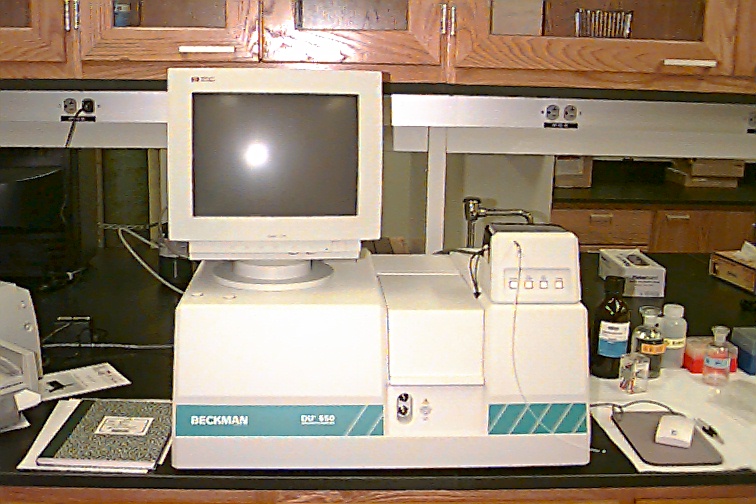 There are two 3400 series gas chromatographs available. One is equipped with a flame ionization detector (FID) and the other with an electron capture detector (ECD). These GC’s have an inboard 4 method storage with extensive self-diagnostic capability, dual injector oven and dual ionization detector oven. The flame detector is autoignite with excellent sensitivity and linearity. The methods employed will detect methane, acetylene, carbon dioxide, and ethylene, using a fused silica metal column. 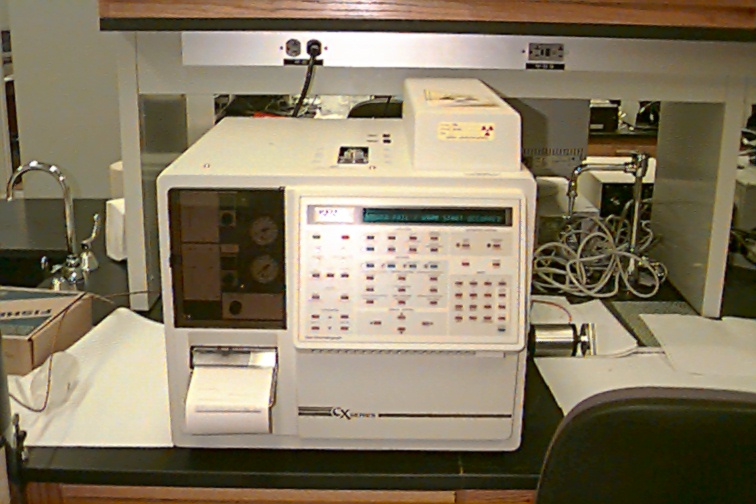 The elemental analyzer is available for analyses of carbon, hydrogen, nitrogen, sulfur, and oxygen (CHNS-O) in biological and detrital samples. The original analytical method is based on the complete and instantaneous oxidation of the sample by “flash combustion” which converts all organic and inorganic substances into combustion products. The resulting combustion gases pass through a reduction furnace and are swept into the chromatographic column by the carrier gas (helium) where they are separated and detected by a thermal conductivity detector (TCD), which gives an output signal proportional to the concentration of the individual components of the mixture. 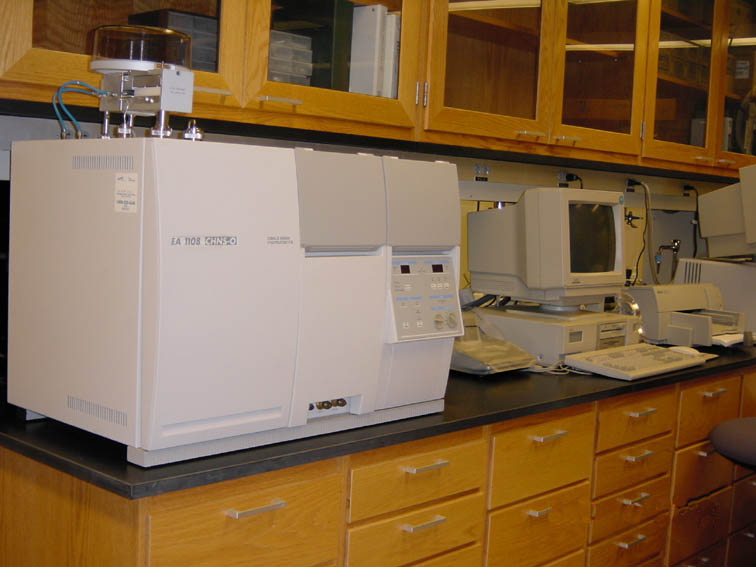 The total organic carbon analyzer is a high-temperature combustion method used for analysis of dissolved organic carbon (DOC). Ultrapure oxygen gas is used as both a sparging and carrier gas. Sparged, acidified samples are injected into quartz combustion tubes containing catalysts prior to entering the infrared detector to measure CO2. The carbon contents of environmental samples are compared to a series of standards prepared with ultrapure water. 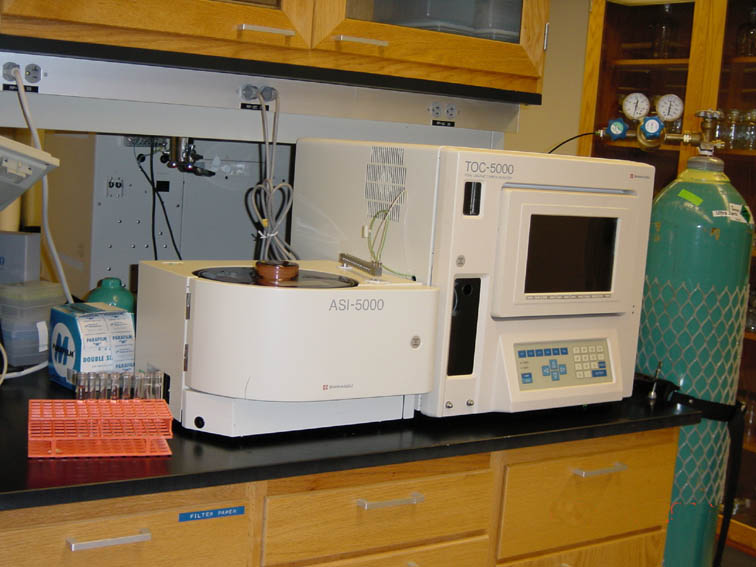